The Raising Peace Festival is run by volunteers but we do incur some costs in running our events. We welcome any donations to support our work. 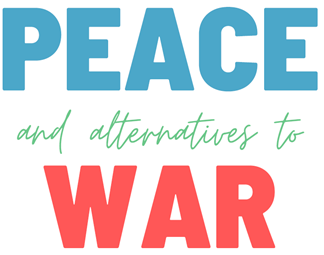 As we face an increasingly complex and worrying world, the Australian Government is putting most of its resources into a militarised approach to assuring our security. But there are other ways to do this. Over the ANZAC Day long weekend Raising Peace presents a series of discussion about how we can assure a secure and peaceful Australia – and region – for all.

You can watch video recordings of all three talks here.

A Reflection on the weekend

One of our audience, Rev Dr Chris Walker, reflected on the weekend’s event and shared the following:

Over the ANZAC weekend I took part in the Raising Peace Conference via Zoom. I was impressed with the range of speakers and what they presented. Australia gives a great deal of attention to recognizing war and those who took part in war. ANZAC day commemorates not only the disastrous campaign in Gallipoli in 1915 but also all those who have taken part in the many wars Australia has willingly joined. I am not denying the suffering of those who took part and acknowledging that, but I wish we gave more attention to exploring ways forward for peace and security.  That is what this conference focused on.  Here are my reflections from it.

We need to recognize honesty what really took place when white colonizers invaded Australia. The history books used to imply that white settlers simply moved out and the indigenous population retreated. The reality is that there were many massacres. Indigenous people with inferior weapons did fight to retain their land. There were frontier wars right up to the 1930s across Australia. If we recognize ANZAC day, which was a disastrous defeat with great loss of life, we ought to recognize publicly the frontier wars in which indigenous people fought for their country and suffered greatly as a result.

When white Australians developed pastoral lands and cane fields on the east coast, those in charge saw the need for cheap labour to do the hard work. South Sea islanders were forcibly taken from islands such as the Solomon Islands and Vanuatu and brought to Australia to live in slave like conditions in a practice known as ‘blackbirding’. This took place from the mid nineteenth century up to the 1930s especially in Queensland.

Australia has this dark history that needs to be acknowledged. We have not even adequately recognized those aboriginal Australians who joined the armed forces and served alongside others in the First World War and since.

National security has become a major talking point.  We should broaden the discussion from the need for military alliances especially with the USA and the UK, and fear of China. I believe it is important for Australians to acknowledge that we do not always have the high moral ground. Australia has mistakenly followed the USA into its wars, such as in Afghanistan and Iraq. Our Australian forces have been involved in war crimes. Australia has not upheld United Nations’ standards such as in relation to asylum seekers and refugees.

In regard to national security, the position was put forward that rather than aligning ourselves uncritically with the USA and its aggressive military actions, Australia would do well to adopt a ‘strategic defence’ approach. This would be more like that of Switzerland and Sweden which do not engage in war but are prepared to defend themselves. This would mean not getting involved in wars beyond our borders in the mistaken belief that we need to do so to ensure we have the USA to protect us. If we adopted a ‘strategic defence’ approach this would influence how the military budget is developed and spent. We would not need expensive nuclear submarines which have limited usefulness and tie us to the USA for their maintenance. We could, for example, acquire or develop effective surveillance equipment in order to be aware of any threats that might come and that could be used for other purposes as well such as tracking weather events.

Discussion about defence also needs to expand beyond military considerations. We ought to be doing more to defend ourselves against climate change and extreme weather events. We can do more to protect the health and well-being of our people.  The extent of our national budget spent on expensive military hardware could be reduced and more spent on overseas aid, innovation, health and education. Overseas aid is not just an optional extra; it should conform to United Nations’ standards and be seen as a means to foster positive relationships within our region in particular. Australia’s poor response to climate change also needs to be vastly improved for the sake of our Pacific neighbours and ourselves. Australia could become a leader in alternative energy but so far is reluctant to move away from fossil fuels despite knowing we need to do so.

In recent years Australia has reduced its diplomatic activities and gives more attention to fears than seeking positive relationships. Our government listens to our military and security services which have a bias to regarding others as enemies or potential enemies. Instead, we should be seeing others as friends or potential friends and acting accordingly, building relationships and fostering open communication and cooperation. Despite Russia’s brutal invasion of Ukraine, it would be a mistake to expel Russian diplomats from Australia and thereby cut off relations and communication.

There are better ways to deal with issues than by aggressive talk and actions. Our politicians typically speak in such ways to those they regard as the opposition, or in regard to nations they do not like such as China. Would that we could more towards more respectful and considered approaches in our political and public life in Australia. We are not well served by those in the media who gain attention by their aggressive language. The ABC needs to be well supported in order to be a balanced voice.

There are organisations and programs that foster non-violent peaceful approaches. These need to be better known and made available. One educator has developed ‘The Gandhi Experiment’ which she uses in schools as well as with adults. There are others also who provide training that is an alternative to the reactive approaches that people typically use. Security is not just a matter of national security; many people need personal security such as from domestic violence. Peace is not only the absence of war but is a positive state of well-being. It begins with us individually but also involves peaceful relationships with other people, other nations and the planet itself.