Faith and Peace: How faith inspires to work for peace

People of faith from the Christian tradition and from other faith traditions will speak about how their faith inspires them to work for peace. After short talks, there will be breakout rooms to talk further with a faith leader about their and others’ faith journeys.

Speakers on the panel:

Rev Dr Chris Walker is a Uniting Church Minister who served in a range of roles from local church Minister, to being principal of the theological college in SA, to serving as national consultant for theology and discipleship for the Assembly of the UCA. Among the books he has written is Peace Like A Diamond: facets of peace (Spectrum, 2009). This book is out of print, however, Amazon has a kindle edition for just $3.99. He represented the UCA at the WCC international ecumenical peace convocation in Jamaica in 2011. He has a long standing concern for peace expressed in writing and activism. www.revdrchriswalker.wordpress.com 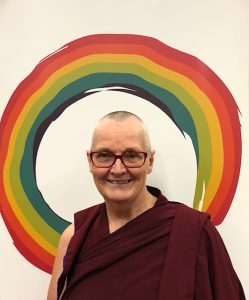 Venerable Thubten Chokyi is a Buddhist nun in the Tibetan tradition and Senior Resident Teacher at Chenrezig Institute, in the Sunshine Coast, QLD. She is also the International Director of Liberation Prison Project supporting men and women in prisons worldwide on their spiritual journey to transform their minds and lives through Buddhist practice and study.  Ven Chokyi is a longterm member of the Womens Interfaith Network and Interfaith forums on the Sunshine Coast. She is the Chair of the Australian Sangha Association serving Buddhist monks and nuns nationally. 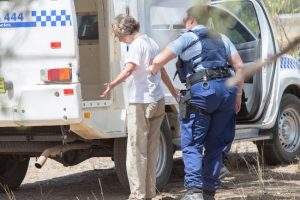 Gill Burrows, see photo above, Born in England, mother of four adult children and grandmother of ten, Gill and her husband live in Sydney.  Gill has a deep interest in learning how to live the nonviolence taught by Jesus who said Love one another and Love your enemies.  In this time of endless wars and increasing militarism, when will be see that violence does not bring lasting peace? Trained as a scientist, Gill understands the urgency of our intergenerational responsibility to care for the earth, our common home, so eloquently described by Pope Francis in his 2015 writings ‘Laudato Si’.  Gill was one of the founding members of Pace e Bene Australia an organisations seeking to foster the spirituality and practice of active nonviolence https://www.paceebene.org.au/.  Gill is also a member of Pax Christi NSW, ARRCC – Australian Religious Response to Climate Change, IPAN – Independent and Peaceful Australia Network and Sydney Knitting Nannas and Friends against gas and greed. 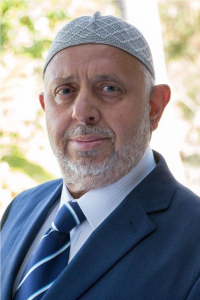 Mr Zia Ahmad is the Editor-in-Chief of the Australasian Muslim Times (AMUST) and a Trustee of Islamic Foundation for Education and Welfare (IFEW) as well as Australian MEFF Consortium (organisers of Multicultural Eid Festival and Fair, MEFF). Zia is professionally a Biochemist, BAppSc (Biomedical Science), MAppSc (UTS) having retired in mid 2013 after more than 40 years of active service at the School of Molecular Bioscience, University of Sydney. Ziaul Islam Ahmad, originally from Azamgarh, UP, lived in Aligarh, Delhi and mostly in Kashmir, arriving in Australia from India at the age of 18 in 1971 together with his parents and 5 siblings. While trying to settle as new migrants in a new country, he and his family, led by his father Dr Qazi Ashfaq Ahmad, were closely associated with pioneering efforts to establish Muslim Community and Islamic educational and daawah activities in Australia as well as interfaith dialogues and multiculturalism promoting understanding and harmony in the Australian society.

Peter Griffin, born 1950  in Queensland. He grew up in Sydney in a Roman Catholic family. Standard middleclass education and after one year as a seminarian (1969), took to a wide variety jobs and occupations until marrying in 1981.Working life since then as a cleaner/storeman and for the last twenty years as a Community Support Worker (Disability and Aged Care.). Since the early 80’s Peter has taken an increasing interest in Peace and Social Justice, mainly under the banner of Pax Christi, an international peace movement founded in Europe in 1945 as a reconciliation movement bringing together French and Germans after World War II.

Margaret Parker grew up in Ireland, in the Catholic Faith and trained in England as a nurse and midwife. On her arrival in Australia, she became a member of the Paulian Association and went to Papua New Guinea as a Lay Missionary volunteer. Margaret was introduced to the Brahma Kumaris at a retreat in the Southern Highlands and adopted their philosophy and lifestyle. She has been active in their meditation centres in Wollongong and the National Headquarters in Sydney. She was a member of the Illawarra Women’s Interfaith Network in Wollongong and has participated in Prayer Vigils and Prayer Services for the UN International Day of Peace for several years. 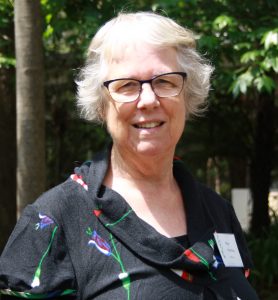 Wies Schuiringa, see photo above, has been a member of the Religious Society of Friends, Quakers in Sydney for more than 30 years. She grew up in the Netherlands in a Mennonite family, a liberal Christian church that is one the “peace churches”. Wies is a retired social worker. She worked in several organisations in front line positions and in the latter half of her career in management positions. She now holds voluntary positions with the Quakers, the NSW Ecumenical Council and with other organisations. Pacifism and peace have been part of Wies’s thinking her whole life, especially growing up in the aftermath of WW2 and then the threat of the cold war with nuclear weapons. “There is no way to peace – peace is the way.”