Not Sold Out!    This event’s capacity has been increased!    If you missed out the first time, please try to register again! 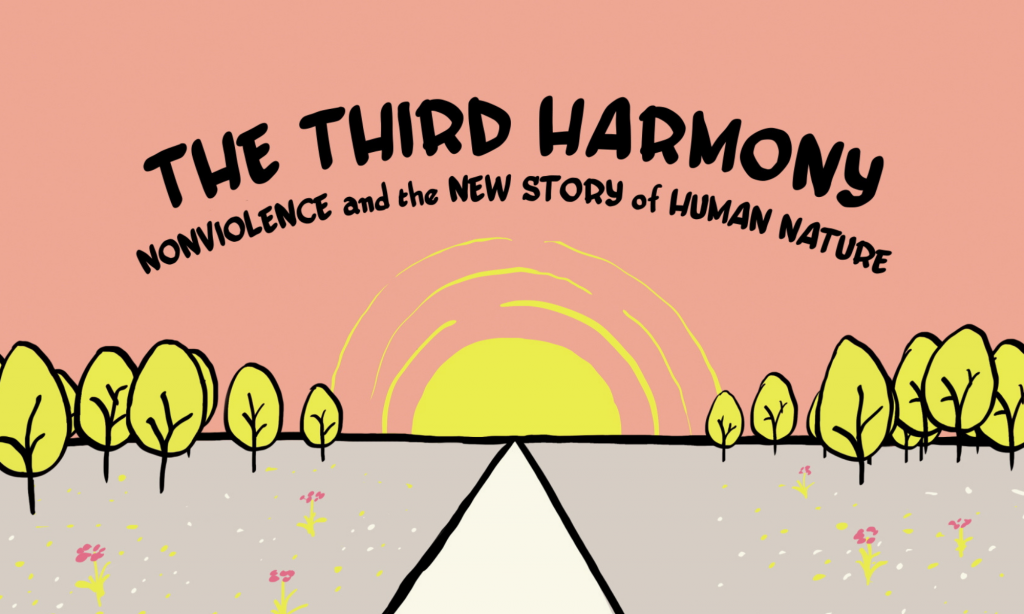 “The Third Harmony tells the story of nonviolence, humanity’s greatest (and most overlooked) resource.

“To be nonviolent is be an artist of your humanity,” says Palestinian nonviolence leader and founder of the Taygheer Movement, Ali Abu Awwad, in a new documentary about the power of nonviolence and a new vision of human nature. Drawing on interviews with veteran activists like Civil Rights leader Bernard Lafayette, scientists like behaviorist Frans de Waal and neuroscientist Marco Iacoboni, Congresswoman Pramila Jayapal, political scientist Erica Chenoweth, futurist Elisabet Sahtouris, and others, this 44-minute documentary will help the general public, often at a loss to understand the protests occurring in many cities, to better grasp just what nonviolence is and how it works. The film also delves into the important role that nonviolence plays in the wider struggle to develop a new theory of human nature, how every one of us can add to our personal growth and fulfillment while benefitting society through the use of this time-tested power.

Directed and produced by the respected nonviolence scholar and author, Michael Nagler, co-founder of the Peace and Conflict Studies Department at U.C. Berkeley, the viewer is given the deep awareness that nonviolence is a serious field of study, or in the words of Mahatma Gandhi, “Nonviolence is not the inanity people have taken it for.” This is echoed by Tiffany Easthom, Executive Director of the Nonviolent Peaceforce in the film, when discussing the power of unarmed civilian protection as a tool in the nonviolent toolkit: this is not about being “peace activists who hope that unicorns and rainbows will rule the world one day. This is hard work.” Changing the story that makes violence of all kinds seem practical in our world is hard work. But it’s certainly time for this change to happen. The Third Harmony contributes to that important effort.

Several of the more successful films on the “new story,” the emerging narrative about human meaning and purpose, have touched on nonviolence, but this is the first to explain in depth the interdependence of these two defining trends of human civilization in our time, which drew documentary industry leader Steve Michelson of the Fund for Sustainable Tomorrows into the project as Executive Producer along with Thomas Eddington, Ryah Alohalei Ki, and Lou Zweier as well as Sarah Gorsline who edited 35 hours of interview to make this film possible.  The presentation is supported by animations throughout and original music by composer Jim Schuyler.  As Minister Kristin Stoneking, former Director of the Fellowship of Reconciliation, U.S., said, “I just want to watch it over and over.” The film was accepted among 600 applicants to the United Nations Association film festival in October, 2020.

The film’s impact will be enhanced by the already-released book, The Third Harmony: Nonviolence and the New Story of Human Nature (Berrett-Koehler, 2020) and a board game, Cosmic Peaceforce: Mission Harmony Three, all available at the Metta Center for Nonviolence.

Metta is a 501(c)(3) organization based in Petaluma, CA.  It has been working since 1982 to “help people practice nonviolence more safely and more effectively” and has special consultative status at the United Nations.”