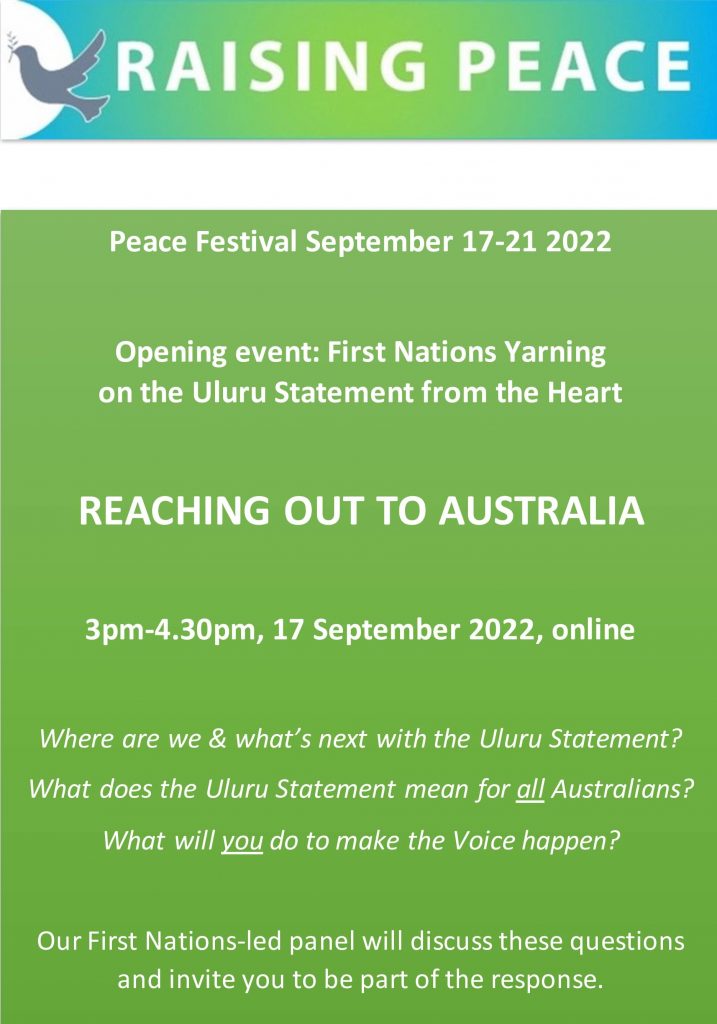 Over many years Australian First Nations people have worked tirelessly for recognition and justice. In 2022 their hopes have taken a huge step forward as the new Federal Government has committed to implement the Uluru Statement from the Heart in full, starting with enshrining an Indigenous Voice to Parliament.

This is an opportunity for all Australians and through this session we hope help people take up this opportunity – and in so doing help to give energy to all First Nations people who have struggled for so long.

Our hope is that this session, Reaching out to Australia, will help to reframe the question of the justice called for in the Uluru Statement by placing the responsibility for change on the 97% of Australians who are non Indigenous. We want to help change the narrative. This Yarning seeks to bring energy into Indigenous communities, by motivating others to act. This energy may encompass both the process of acting on the Uluru Statement, and in the change that will come after.

Featuring a panel of respected First Nations people from around the country (the final list of speakers may change slightly). Aunty Ali Golding will give the Acknowledgement of Country:

Aunty Ali Golding is a grassroots Indigenous leader recognised as a valued elder who demonstrates compassion, humility and justice. A proud Bripi woman, Ali grew up on the Taree Mission in New South Wales. Aunty Ali was 2010 Female Elder of the Year

In the 1980s she became one of the first Aboriginal education assistants at Cleveland High School in Queensland, and in 2004 she graduated from Nungaliya College in Darwin with a Diploma of Theology.

Ali has made important contributions to many national and international forums, including the World Spirit Healing Conference in Canada, International Women’s Day events in parliament, the Women’s Reconciliation Network, the New South Wales Reconciliation Council and AnTAR. Ali has convened with many dignitaries including Nelson Mandela, Queen Elizabeth the second and Gough Whitlam, just to name a few.

In all that she shares so generously, Auntie Ali Golding reminds us how to stay connected and strong.

Margaret Hepworth is the Executive Officer of Initiatives of Change Australia, having been a long-term member and contributor to the work of IofC in Australia as well as internationally. Margaret has a background of over 30 years in Education, a Thought Leader and Founder of the peace-education initiative, ‘The Gandhi Experiment’, teaching non-violence as a conscious choice to students and teachers. Margaret is former Head of Campus / Assistant Principal at Preshil School, Berry Street School and Head of House at Caulfield Grammar in Victoria. She has taken her work in global citizenship/ global humanity across Australia and India, and into Pakistan, Indonesia, China and Fiji.

Margaret has a strong sense of social equity with people-centred leadership qualities. She has experience of taking trust-building and peace-building work into the community, and has worked with diverse groups of people—multicultural, multi-faith and intergenerational. She is the recipient of the Sir John Monash Award for Inspirational Women’s Leadership 2016, the IABC Community Achievement Excellence award 2019, and the Gloria de Souza International Excellence Award- Best Educator 2020.

Pastor Ray Minniecon is an executive member of the Indigenous People’s Organization, Director of Bunji Consultancies, and descendant of the Kabi Kabi nation and the Gureng Gureng nation of South-East Queensland. Ray is also a descendant of the South Sea Islander people with deep and abiding connections to the people of Ambrym Island.

Ray is the father of three children and he has two grandchildren. In his free time, Ray enjoys writing, singing and songwriting. He also loves music, sport, public speaking, and travel.

Des Rogers is a respected Southern Arrernte Aboriginal man of the Pertame Clan from Central Australia and resided in his home town of Alice Springs for many years. He now lives in Brisbane. From founding an Aboriginal business incubator, mentoring youth in Alice Springs in response to culturally appropriate skills development and economic opportunities needs in the community for a period of 15 years he has continued to be mentor to many people. Des is a highly skilled executive leader with extensive Board memberships in the not-for-profit and public sectors. He has provided strategic direction, demonstrated operations and facility management, community engagement, financial management and have a proven track record in driving organisational performance improvement and reform in line with corporate governance and Governmental requirements.

Eddie Synot is a Wemba Wemba First Nations public lawyer and researcher. Eddie is a Lecturer at Griffith Law School, Griffith University and a Research Fellow at the ILC UNSW. Eddie has worked with the Uluru Dialogue and the ILC UNSW since 2018. Eddie’s research focuses on Indigenous peoples and the law, especially public and constitutional law.